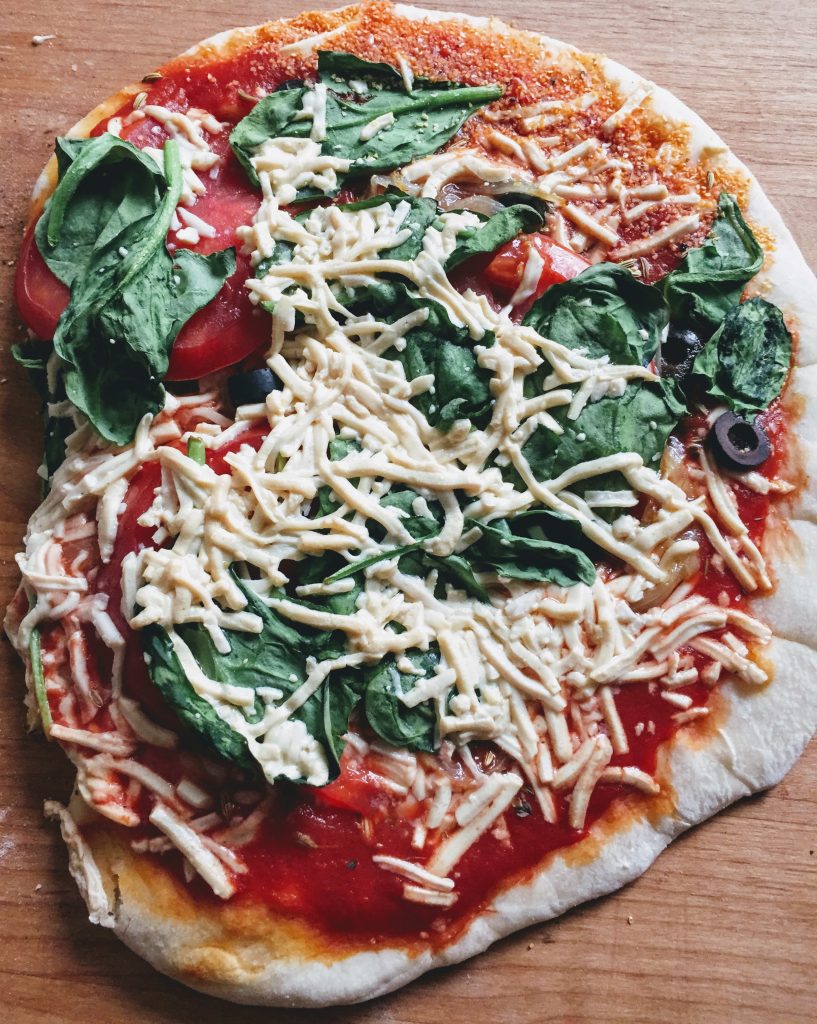 This week my daughter had to have a small surgery in her mouth, so we have been living on soup for a few days.  We are very grateful that it went well and she is recovering quickly.  We will also be grateful not not have soup again for awhile.

The night before the surgery she requested pizza.  This is a great way to get in lots of veggies.  We usually don’t put cheese on our pizza, but Daiya Mozzarella is great on it.  Sometimes I top the pizza with tofu ricotta as well.

The veggies I put on it change every time just depending on what is in the fridge or what looks good at the store.  Some of our favorites are spinach, tomatoes, black olives and basil.

Combine the water, yeast and honey in the bowl of a stand mixer with a dough hook or in a large mixing bowl if you are making it by hand.  Let it sit until the yeast starts to get bubbly, about 5 minutes.  Add the salt, whole wheat flour, and 1 cup of the unbleached flour and the olive oil and mix on low until all the flour is incorporated.  With the mixer on low slowly add the remaining flour.  Turn the mixer up the medium speed  to let it knead for about 5 minutes or knead by hand.  The  pizza dough should not be sticky and should come away from the sides of the mixing bowl.  Let the dough rise in a warm place for 45 minutes to an hour until it is doubled in size.

Preheat the oven to 425.  Roll the dough out on a well floured surface.  Make it as thick or thin as you would like it and in whatever shape.  Place it on a baking sheet and bake the pizza dough for about 8-10 minutes depending on thickness without toppings and then remove it from the oven.

Put on the sauce and whatever topping you would like.  Put the pizza back into the oven and bake for another 10 minutes.  The bottom of the crust should be nice and crisp.