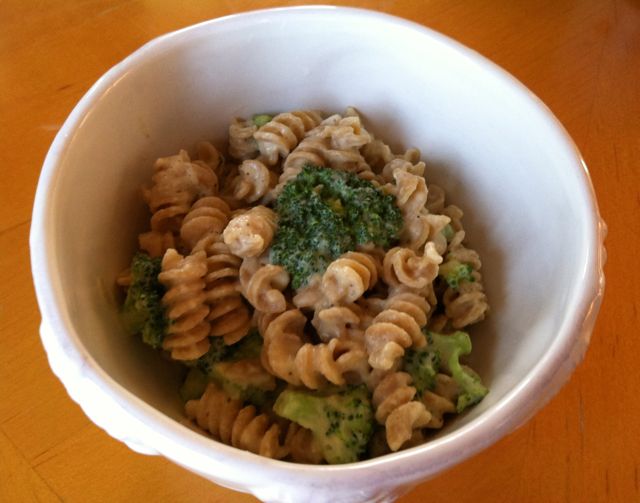 I think this is one of the easiest pasta sauces I have ever made.  The kids named it caulifredo because it is made with cauliflower and it is super creamy and a little cheesy like alfredo sauce, only with almost no fat.  I roasted the cauliflower before blending it for the sauce, which really brings out the flavor.  This is also a very budget friendly pasta dinner.  Pasta is always a kid pleaser in my house, but I think caulifredo is going to be a new favorite.  The kids devoured it and then were asking for seconds and then thirds.

1 head of broccoli cut into small florets (optional, you could use frozen as well)

Preheat the oven to 400.   Cut the cauliflower into small florets and put them on a lightly oiled baking pan.  Roast the cauliflower for about 15 minutes.  Check it after 10 minutes and toss to around.  When it is done it should be fork tender.

While the cauliflower is roasting cook the pasta according to the box directions.  If you are using broccoli add it in with the pasta about 4 minutes before it is finished boiling.  When the pasta and broccoli is finished drain it and then return it to the pot or put it in a large serving bowl.

When the cauliflower is finished roasting put it into the blender with 1 cup of soy milk, nutritional yeast, salt and pepper.  Blend it until smooth adding more milk as it needs it.  Jut keep checking the consistency, you want it to be thick and creamy.  Pour the sauce over the pasta and mix it until well combined.